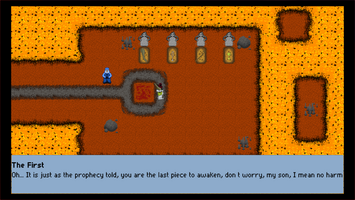 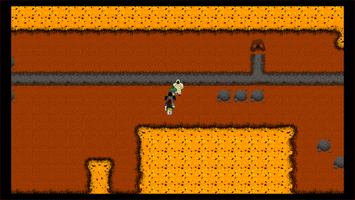 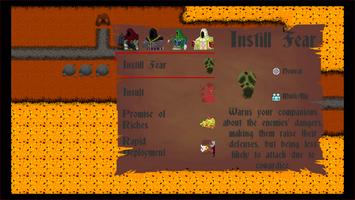 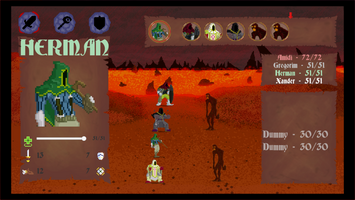 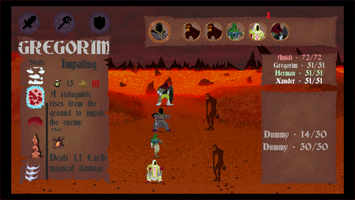 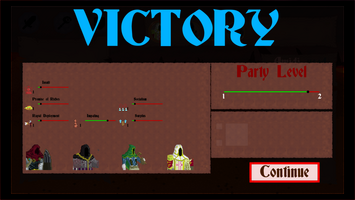 We are very happy and proud to announce that the First Chapter of the Final Inferno is ready!

Final Inferno is a homage to the classics J-RPGs of the golden era, made by a small group of undergrad and grad students during their (sometimes non-existant) free time starting in March 2019.

We have a lot of things planned for the game, and this is just the first of many planned chapters. The second one is already being developed and we hope to release it in the second quarter of 2020. But let's not get ahead of oursevles! We are doing this log to tell you a little more about the game itself!

We wanted to make a game that would feel and play like the old-school JRPGs but at the same time had novel mechanics that would make the game less grind-intensive and more focused on quests and battles that felt challenging. The first step was to get rid of mana. (Almost) nobody likes to enter a dungeon and either fill up their pockets with those blue potions or proceed through every battle without wasting mana, afraid of running out of techs againts the boss. So, we dumped it. Everyone likes using all their might to smash their enemies. So every skill is "free" to use, but will consume more "action points" or the time until you can use that character next. Borrowing the dynamic turn system from games like Shadow Hearts: From the New World, we designed our Battle UI to show when will be the next turn of each character as soon as you move your cursor over that action.

Another important decision towards making it more battle-intensive was to get rid of items and equipment. We didn't want the players to spend time searching for shops or item-drops toward the best armor and weapon, or having to think which is the best build. Neither to hoard red potions to feel safe in dungeons. No. We wanted the player to focus on exploring the world and surviving hell (also, it would feel weird to have someone selling you potions in hell if you start thinking about it). So we focused on skills: each character has a different set of skills, and some are passive ones. The most important of them, for this particular objective, is Xander's ability to heal everyone by a fair amount when a battle is over. So you can continue battling over and over again, but ONLY if you don't lose a lot of health with everyone. With this, we felt we could balance the battles to be challenging enough that the players had to think before acting and heal a lot, but still keep the players free to continue exploring the map without worrying about the act of healing between battles.

But we know that players like to build their characters their way in RPGs (we like it too), so we compensated the lack of items and equipments with skill trees that level up as you use them. So every player will have a skill tree for each character unique to how they play them. There are many more skills that are planned for each character. But for this initial chapter, we only had enough time to implement the "tier 1" skills for everyone. Still, they make room for many different combat strategies that you can use to kill your enemies.

And for our final remark about this chapter: this is only the beginning of a much bigger story. We have a lot more adventures planned for our 4 mysterious characters and many more demons to be slain. We hope you will be looking forward to it as much as we do, and follow them in their journey through hell.

Have a nice adventure, and slay all the demons!